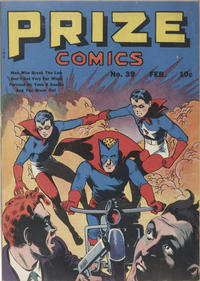 The Man Who Couldn't Remember to Forget (Table of Contents: 1)

Art identification by Craig Delich. Art is consistent with Del Bourgo’s signed art from Mask Comics #2 (April 1945), including his big-mouthed expressions showing teeth and how he draws the “S” inside the ears.

[The Invisibility Paint] (Table of Contents: 5)

Genre
superhero
Characters
The Flying Fist [Freddy Tapps]; Bingo [Junior Tapps]; Carl Rick (practical joker, death); Gabble (actor); Van Lunce (villain, play producer)
Synopsis
The Tapps decide to secure a walk-on role in a new production based on the horrific plague that occured in 1557. After their scene is over, they retreat to the balcony to watch the rest of the play and notice that the bald heads of orchestra members spell "DEATH"! As the Flying Fist and Bingo, they investigate the situation and discover that a person, dressed as the astrologer in the play, is the killer of one of the actors.
Reprints