The Stalker of the Sands (Table of Contents) 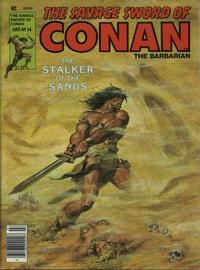 Genre
sword and sorcery
Characters
Conan
Synopsis
Conan kneeling while holding a knife and the right arm of a female naga, whose is on steps below him, and clutching her necklace in his left hand while a much larger male naga threatens him from behind.
Reprints

First Line of Dialogue or Text
Conan was born on a battlefield, during a fight between his tribe and a horde of raiding Vanir.
Reprints

The Stalker Amid the Sands (Table of Contents: 4)

Job Number
RT 322
First Line of Dialogue or Text
In an oasis which is a long two days' ride from Arenjun...
Genre
sword and sorcery
Characters
Conan; Arsil; Sarid; Uskuda (death); Tosya Zul (introduction); Hisarr Zul (flashback)
Synopsis
Conan crosses the desert on his way to Zamboula, chasing Isparana and the talisman known as the Eye of Erlik which she has stolen from Hisarr Zul. In an oasis, he is attacked by two robbers and kills them. Shortly thereafter, Conan meets the Turanian soldier Arsil and his men and learns that they are searching for the robbers he just killed. He is told of a shortcut through the mountains, guarded by a sand demon who turns out to be Hisarr Zul's brother Tosya. He lets Conan go, provided that he kills Hisarr Zul.
Reprints

Adapted from the novel Conan and the Sorcerer by Andrew J. Offutt; continued from last issue and concluded in next issue.
Joe Rosen credit from Savage Sword of Conan: The Original Marvel Years Omnibus (Marvel 2019 series) #4.

First Line of Dialogue or Text
In the 14th Century, red war ravaged the fair provinces of France.
Reprints

Genre
sword and sorcery
Characters
Conan; Thoth-Amon
Synopsis
Conan, on a horse, pointing his sword at the very large head and hands of Thoth-Amon.
Reprints

Wings in the Night: Part Two (Table of Contents: 7)

First Line of Dialogue or Text
The story so far: It was in a dreaded cannibal country that Solomon Kane was recently fleeing for his life..
Genre
sword and sorcery
Characters
Solomon Kane; Kuroba (death); Goru (death); Nayela (death); Loga (death); bat-men (death)
Synopsis
Kane agrees to stay and protect the village however, everyone but him is slain when the bat-men mount an overwhelming attack. Kane sets a trap and burns the bat-men.
Reprints

Adapted from the short story "Wings In the Night" by Robert E. Howard.
Continued from last issue.