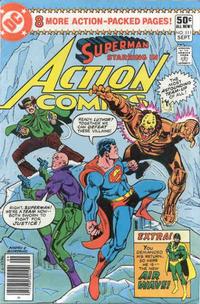 A New Costume for Air Wave! (Table of Contents: 3)

Job Number
S-3002
Genre
superhero
Characters
Air Wave [Hal Jordan]; Jan Jordan; Jennifer Jordan; Karen; Dr. Hargell; a sniper (villain)
Synopsis
Air Wave barely stops kids blowing up the high school sign, and ends up getting sun sick. While he recovers, his niece and nephew destroy his costume. Karen the babysitter, who has figured out Hal is Air Wave, secretly sews him a new one. Air Wave debuts his new costume while stopping a shooter at a theme park.
Reprints

Credits for script, pencils and inks confirmed from Julius Schwartz's editorial records, provided by DC Comics. The same records show that the story, originally titled "A New Uniform for Air Wave," was previously scheduled as 10 pages for release in Action Comics #490 (December 1978).