The Satisfaction of Black Mariah (Table of Contents) 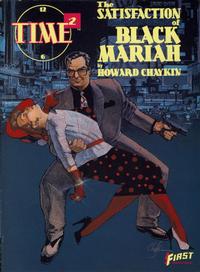 The Satisfaction of Black Mariah (Table of Contents: 1)

Genre
science fiction
Synopsis
From back-cover: "A tuned out guy... a turned on doll... and a psychosexual police car on the prowl... First it is an undertone, subtle and tentative, honking and choking behind the blunt clamor of the klaxon fugue... Then it is a harmony, gliding erotically against the subdued roar of the wet midnight street... Now it is a counterpoint, seductively retracing the melody, reclaiming its elegance from the urban ensemble... And finally a voice, growling and caressing a language beyond human comprehension--yet rife with meaning, both universal and transcendent... There'll be hell to pay."

Credits simply list creators as "A charm to soothe the savage breast from Howard Chaykin, Ken Bruzenak, John Moore, Richard Ory & Steve Oliff" Specific credits given above are based on previous volumes as well as Howard Chaykin's American Flagg (1988 Series) produced by a similar team.