On-sale date from The Comic Reader #180.
This issue has variants: 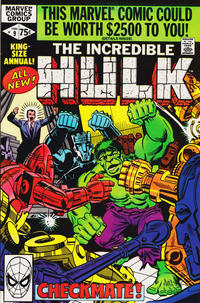 A Game of Monsters and Kings (Table of Contents: 1)

Credit information provided 2005 by Al Milgrom. This story was originally produced for a Coca-Cola promotion that fell through. The two-page illustration by Milgrom was originally intended to be its cover. See also, Spectacular Spider-Man Annual, The (Marvel, 1979 series) #2 and Fantastic Four (Marvel, 1961 series) #220-1. (Information from Steven Tice and The Comic Reader #177.)