No copyright registration was filed for the issue. As such, there is no official on-sale date. However, May is all but certainly when the issue first went on sale. The official on-sale date for issue #136 was April 29, and it is June 24 for #138. A May on-sale date is consistent with that. Also, at this point in time, comics in Marvel's color newsprint line consistently went on-sale in comics stores four months ahead of the cover date.

There is no Comics Code Authority seal of approval on the cover. According to Marvel scriptwriter (and occasional editor) Roger Stern, the absence of the seal was an accident. "That month, Marvel started running a contest with a big honkin’ banner across the tops of all the covers... which necessitated some special paste-ups... and the code seal either fell off or was never added." Stern was quoted in Comic Book Urban Legends Revealed #93 (March 8, 2007) at www.comicbookresources.com.
This issue has variants:

Phoenix Must Die! (Table of Contents) 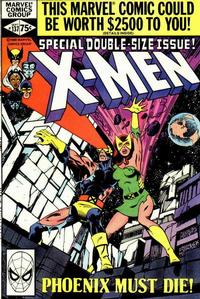 The Fate of the Phoenix! (Table of Contents: 2)

First Line of Dialogue or Text
I am--the Watcher!
Genre
superhero
Characters
X-Men [Professor X; Cyclops; Phoenix [Jean Grey] (Death; also as Marvel Girl and Dark Phoenix); Storm; Wolverine; Colossus; Nightcrawler]; Watcher [Uatu]; Recorder; Beast; Angel; Lilandra; Shi'ar; Kree; Skrulls; Supreme Intelligence; Gladiator; Imperial Guard [Starbolt; Oracle; Tempest; Nightside; Smasher; Warstar (first); Earthquake (first); Hussar (first); Manta (first)]
Synopsis
Lilandra transports the X-Men to her base so that Phoenix can be killed for her crime of wiping out an entire star system. Xavier explains that the Phoenix Force has been purged from Jean and demands the right to trial by combat when his captors refuse to listen. The X-Men and the Imperial Guard fight on the Blue Area of the Moon to determine Jean's fate. During the battle, Dark Phoenix manifests herself once again and Jean sacrifices herself rather than let the Phoenix loose on the universe.
Reprints

Keywords
Blue Area of the Moon; Moon; trial by combat

As is now known, Phoenix and Jean Grey were never one and the same as revealed in Jean's resurrection in Avengers #263 and Fantastic Four #286. In the original story, Jean Grey didn't die and the story with the original ending is printed in Phoenix: The Untold Story #1.