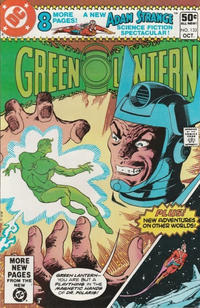 Nightmare at the North Pole! (Table of Contents: 2)

Get The Newest Number Yum! (Table of Contents: 3) (Expand) /

Siege of Ranagar! (Table of Contents: 8)

Job Number
J-6796
Genre
science fiction
Characters
Adam Strange; Alanna; Bran Sar; Sardath; Kaskor
Synopsis
Adam discovers Kaskor's plans to invade the Ranagarians' last stronghold on Crater Island, so Adam leads a successful surprise attack to retake Ranagar. But after the battle, the Zeta-Beam wears off Adam and he is teleported back into the hands of Kaskor.
Reprints

Strong Arms Make All The Difference! (Table of Contents: 9) (Expand) /

This Month from the J.C.H. Cubicle / promo (ad from the publisher) / 0.3 page (report information)