Capt. Marvel Jr. Meets Himself In The Future!! (Table of Contents) 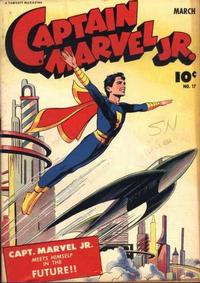 Captain Marvel, Jr. Meets Himself in the Future (Table of Contents: 2)

The story, of course, could not know or take into account the future Shazam! (DC, 1973 series) #1 (February 1973) story in which the entire Marvel family and friends are tossed into Suspendium for 20 years. Therefore, it would have made Freddy biologically only 95 years old for this story.

First Line of Dialogue or Text
Well, well what do you know!
Genre
humor
Reprints

The Shangri-La Saboteurs (Table of Contents: 4)

Original indexer listed artist for this story as Mac Raboy. Art-spotter Kelly Izaj thinks the artist on this story was Al Carreno, reporting during July 2008. Dennis Summers reported to the GCD on April 25, 2020 that he too is convinced this is not Raboy's work, but he is uncertain who it might be.

Additional information on this sequence came from Daniel Smith, October 13, 2006.

No Fooling (Table of Contents: 6)

There's No Such Thing As Waste Paper (Table of Contents: 7)