A Death in the Family! (Table of Contents) 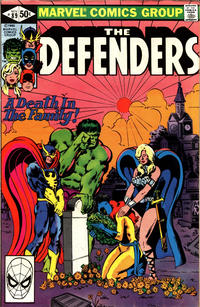 A Death in the Family! (Table of Contents: 1)

Valkyrie in old costume on cover, restored by Clea at Hellcat's request for Patsy's mother's funeral.

Story has a profanity panel which Don Perlin revealed was supposed to be an inter-office joke; In one of the panels of the story, there is a TV on in the background and a pink rabbit is holding up a box of cereal that says "SHIT" across the top. Perlin claims that he thought the guys in the office would get a kick out of it before they changed it, but nobody caught the vulgarity and the comic went to press. Jim Shooter, reportedly, found this far from funny and chewed Perlin out about it before Don pointed out that it made it past an assistant editor, an editor, a proof-reader and the editor-in-chief who are paid to catch stuff like that.

The panel was not changed in the reprint in Essential Defenders.