The consensus on the GCD discussion lists and the Comic Books: The Golden Age Facebook page (26 December 2015) is that the Captain Marvel, Jr. figure is a Raboy paste-up and the rest of the art is not known for sure.
Michael Fraley form the Comic Books: The Golden Age Facebook page (26 December 2015) reports the back of the head is a swipe from an Alex Raymond circa 1941 Flash Gordon page.
Roger Hill confirmed on the GCD Chat discussion list that Gene MacDonald did no Master Comics covers (per an interview Roger did with him before his death) (26 December 2015). Original indexer listed Gene MacDonald ? under pencils and inks. 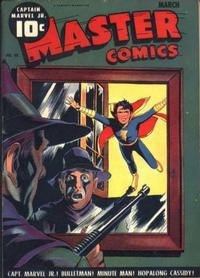 The Paradise for Thieves (Table of Contents: 2)

The Mimic and the Mite (Table of Contents: 5)

First Line of Dialogue or Text
Yes sir, when it comes to keepin' your equipment in good shape...
Genre
humor

There's No Such Thing As Waste Paper (Table of Contents: 7)

First Line of Dialogue or Text
Not so good!
Genre
humor; western-frontier

The Barrage Mirage (Table of Contents: 9)