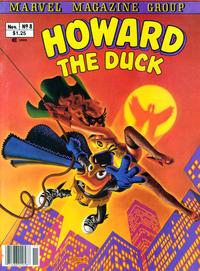 The Grey Panther (Table of Contents: 4)

How the Duck Got His Pants (Table of Contents: 5)

Article on the problems with the Disney Company regarding Howard, with panel and cover reprints.

Genre
satire-parody; anthropomorphic-funny animals
Characters
Beverly Switzler; Howard the Duck
Synopsis
Howard and Beverly take jobs playing Duck-Man and Duck-Girl as entertainers in a shopping mall, only to find themselves accused of murdering their employer.

Batman parody. Includes "The Future by Finger" display of giant household appliances as a reference to Bill Finger's stories.