The on-sale date is the publication date reported in the U. S. Copyright Office filing. Detective Comics, Inc. is listed in the filing as the publisher. 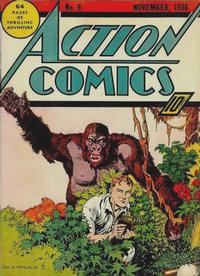 Genre
superhero
Characters
Superman [Clark Kent]; Jimmy Olsen (introduction, as an office boy); Nick Williams (villain, introduction); Lois Lane; George Taylor (unnamed)
Synopsis
Clark Kent is introduced to a fighter manager who claims to be Superman's personal manager. But when Lois discovers the existence of a phony Superman, who is tied to that manager, the real Superman must act quickly to save Lois' life.
Reprints

The last panel on page 13 is an illustrated blurb asking readers to follow Superman's adventures in forthcoming issues of Action Comics. Artist unknown, but not Shuster or Lauretta.

All credits by Craig Delich.

First Line of Dialogue or Text
Just as Steve is about to tell Chuck...
Genre
adventure
Characters
Chuck Dawson

First Line of Dialogue or Text
Marco Polo with the rest of his party...
Genre
adventure; historical
Characters
Marco Polo

Bailey signs on the final page.

The Emerald of Cheops (Table of Contents: 14)

Information for this sequence from Barry Sandoval.