This cover may have been a last-minute replacement for one by Michael Golden. The Golden cover showed Rogue holding a defeated Thor and Iron Man above her head. The other Avengers are lying among debris on the ground. An image of Ms. Marvel partially covers the series title. Marvel editor-in-chief Jim Shooter's signature appears in a production box below the picture area on the original. In a November 23, 2011 comment on his website, Shooter wrote, "... at a glance, I'd guess that Golden's cover wasn't used because he didn't allow room for the contest banner at the top, which we were obligated to run. The cover that did run looks like it was cobbled together at the last minute. The Golden cover appears to have my signature on it, meaning I approved it. Maybe someone upstairs noticed that the contest banner was missing. But, I don't know for sure." 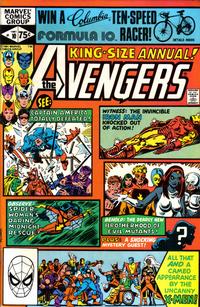 By Friends--Betrayed! (Table of Contents: 1)

Between AVENGERS #209 / 210; This story was supposed to follow the events in Ms. Marvel #25 but the book was cancelled with issue #23 and the story was finally printed in Marvel Super-Heroes #11 in 1992 and is the tale of how Rogue stole Ms. Marvel's powers. Rubinstein and Simons credits confirmed by the artists as detailed here: http://ohdannyboy.blogspot.com/2008/12/original-art-stories-ghosts-of-aven…