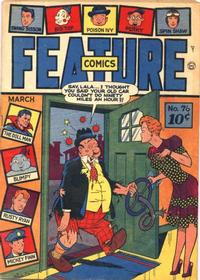 Death Holds the Doll Man in Pawn (Table of Contents: 1)

Genre
superhero
Characters
Doll Man [Darrel Dane]; Martha Roberts; Elkins (introduction); Mephisto and his gang (villains, introduction for all)
Synopsis
Darrel Dane gives Martha Roberts an engagement ring and proposes to her. The evil Mephisto, having seen Dane at the scene after a brush with the Doll Man, kidnaps the happy couple, forcing Dane to use his fists against the villain until he can find a moment to change into Doll Man.

[The Satyr Strikes] (Table of Contents: 4)

First Line of Dialogue or Text
Oh, dear, what a problem!
Genre
humor

Heads in 3/4 backview with the jawbone going back behind the ear is peculiar. This can be found in his credited "Mike Gibbs Guerilla" story in Adventure Comics #88, and also in his Lt. Hercules stories in Green Lama Comics. Very few here, so uncertain.

Alababa and Pierpont Lee take hits of a hookah in splash panel.

Art is by Mort Leav, with his large hands, lively figures and a special crouching way of running, with thighs lifted high.