No copyright registration was filed for this issue, so there is no official on-sale date. However, it is all but certain the issue went on sale in September. According to copyright records, the on-sale date for issue #140 was August 26, and the date for #142 was October 28. A September on-sale date is consistent with that. Also, by this point in time, comics in Marvel's color newsprint line went on sale in comics stores four months ahead of the cover date. (Newsstands received comics two to four weeks later.) January cover-dated comics would have first gone on sale in September.
This issue has variants: 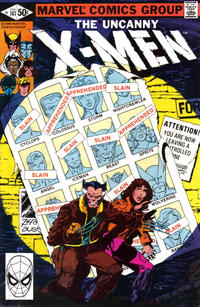 Days of Future Past (Table of Contents: 2)