The entire issue without cover is reprinted in Elson's Presents Super Heroes Comics (DC, 1981 series) #6
This issue has variants:

Blockbuster's Back in Town! (Table of Contents) 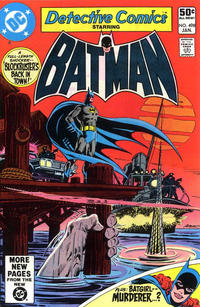 Night of the Savage (Table of Contents: 1)

The first few pages of the story take place shortly after Batman's last encounter with Blockbuster in Batman #309. In the present, Batman is shown to be recovering from the gunshot would he received in Detective Comics #497.

The Flash Meets the Bureauc-Rat (Table of Contents: 2) (Expand) /

The Tightening Web! (Table of Contents: 3)