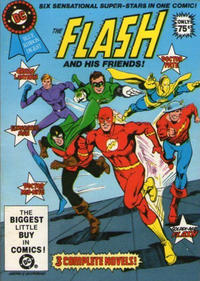 The Flash and His Friends! (Table of Contents: 1)

Genre
superhero
Characters
Flash [Barry Allen]; Pied Piper; Tower City police officers; Elongated Man [Ralph Dibny]; Sue Dibny; Iris West
Synopsis
The Pied Piper uses his musical control to force both The Flash and The Elongated Man to commmit robberies and forget they did so, but the heroes meet while trying to solve each others' crimes and realize the Pied Piper is behind the scheme, and defeat him.
Reprints

Flash is able to temporarily stretch using one drink of Gingold.

The See-Nothing Spells of Abra Kadabra! (Table of Contents: 3)

Trail of the False Green Lanterns! (Table of Contents: 4)

This Is Your Invitation to an Instant Classic! (Table of Contents: 6) (Expand) /

More Whirlwind Adventures of the Flash (Table of Contents: 7) (Expand) /

The Flash / promo (ad from the publisher) / 1 page (report information)

Back cover. Previews of the stories in the issue. Border is comprised of many small drawings of the Flash in flip book-style action.