The Haunted House and the Spectre! (Table of Contents) 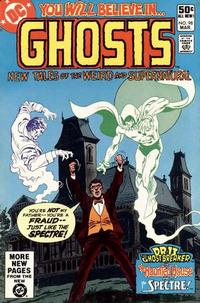 The Files of Dr. Geist (Table of Contents: 1)

The Death of a Ghost! (Table of Contents: 2)

The Asylum of Specters (Table of Contents: 5)

The Haunted House and The Spectre! (Table of Contents: 7)

Pencils are by Michael Adams, not to be confused with the pen name used by Mike Gustovich on occasion. Pencils were originally credited to Mike Gustovich using a pen name. However, Gustovich confirmed that he only used the Michael Adams pen name for several issues of Captain Atom that he penciled, and that he did not pencil the Dr. 13 stories appearing in Ghosts.