MOONCHILD COMICS No.3 (Table of Contents) 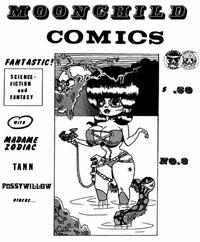 William Pearson does a caricature of Nicola Cuti.

SHE WAS CALLED... MOONCHILD (Table of Contents: 3)

Genre
science fiction
Synopsis
Moonchild and her Taxi-Trog reduce to "mini-micro-molecular midgets" and she encounters a benign humanoid, a uranium atom named U-238, who is converted by a "neutron storm" into the evil and lecherous U-235, with predictable results.
Reprints
Keywords
adult

4 cartoons / drawings. Next appearance in OTHER SCENES Vol.4 #10 (sex/drugs/revolution hippie journal, December 1970). In an interview Estren's "History of Underground Comics," Cuti said he intended Moonchild to be basically an "aboveground" comic character, and Pussywillow an "underground" comix character.

[TANN AND THE ASTRONAUTS] (Table of Contents: 8)

[MOONCHILD AND THE DIMENSION TRAVELLER] (Table of Contents: 9)

Genre
science fiction
Synopsis
Attacked by pirates on "Kit's Planet," Moonie is rescued by Spud, a "dimension traveler," and makes a short tour of various dimensions with him.
Reprints
Keywords
adult

Table of Contents
This issue was most recently modified by:
Issues in this series have been indexed by:
If you believe any of this data to be incorrect, please let us know.
Cover thumbnails are used for identification purposes only. All rights to cover images reserved by the respective copyright holders.