The copyright registration for the issue reports a publication date of November 11, 1980. However, this date most likely reflects when the direct-sale variant went on sale. The direct-sale variant, i.e. the edition available at most comics stores, was generally available for sale two to four weeks before the newsstand edition.

His Name Is Bullseye... (Table of Contents) 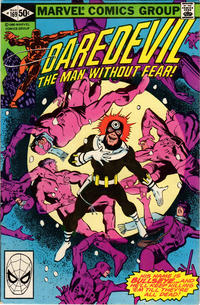 Page 1 references events in the Daredevil/Punisher story that was pushed back for Code problems.