Synopsis
Parody of the movie poster for "Westworld". 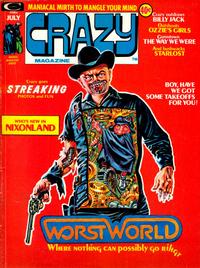 Photography by Vince Colletta. The pictures were retouched for humorous effect by Marie Severin. Inside front cover.

Vice-President Spiro Agnew is a guest on the Dinah Shore Show, while Henry Kissinger appears on What's My Line. The parody is interrupted on page 5 by a photo skit in which Marvel staffer Don McGregor shoots editor Marv Wolfman for Wolfman intimating in a previous issue that McGregor is short.

Lights On, Nobody (Table of Contents: 5)

The History Of Moosekind, Part Five (Table of Contents: 7)

Synopsis
The evolution of civilization is traced, focusing on Asia.
Reprints

The caricature of Marv Wolfman on page 4, panel 2 was done by Marie Severin rather than Dick Wright.

The Starloose! (Table of Contents: 14)

First Line of Dialogue or Text
It Is Time Once More
Synopsis
Editor Wolfman postulates solutions for the energy crisis.