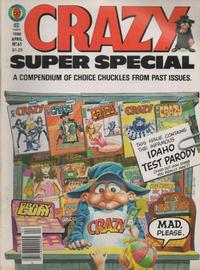 The Insult That Made A Corpse Out Of "Mac" (Table of Contents: 1)

In This Issue (Table of Contents: 2)

Parody of the television program 'McCloud.'

Evolution And History Of Moosekind, Part 1 (Table of Contents: 4)

Genre
humor; satire-parody
Synopsis
The evolution of human history, parodied as it would apply to anthropomorphized moose. This chapter covers the evolution of prehistoric moose ancestors.
Reprints

If Human Interest Articles Were Written Like Crime Stories (Table of Contents: 5)

The Walnuts (Table of Contents: 6)

All in the Depression Dept. / comic story / 7 pages (report information)

Enticing Ads for Jobs You Wouldn't Want (Table of Contents: 8)

Richard Nixon makes a cameo as a villainous wrestler. The illustration of The Nebbish on page 5 is a paste up of Marie Severin's work.

Warren Savin is one of Skeates' pen names (ie, he is credited twice).

The Evolution and History of Moosekind, Part II (Table of Contents: 12)

Genre
humor; satire-parody
Characters
Kaspar The Dead Baby; Windy The Not-So-Good Witch; Kaspar's father; Kaspar's Mother
Synopsis
After listening to Kaspar's tale of how he was killed during a brawl between his father and mother, Windy suggests a way for Kaspar to avenge himself against his no-good father.
Reprints

Genre
humor
Synopsis
Series of one panel cartoons with a prison theme.
Reprints

Evolution And History Of Moosekind, Part 3 (Table of Contents: 17)

Genre
humor; satire-parody
Synopsis
This chapter follows the evolution of Moosekind through the early emergence of Greek civilization.
Reprints

Revenge in Peoria! (Table of Contents: 22)

Genre
humor
Synopsis
A twelve-year-old boy seeks to avenge himself on his mother for humiliating him at school.
Reprints