Daredevil becomes a monthly book with this issue.

One Minute From Now...DD Will Wish He'd Stayed In Hiding! (Table of Contents) 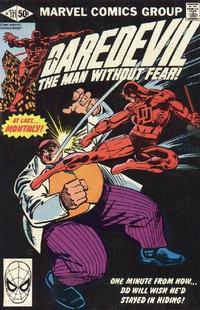 In the Kingpin's Clutches (Table of Contents: 1)

This issue marks the first actual meeting between Daredevil and The Kingpin.