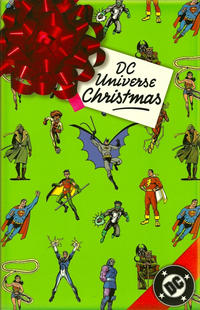 First Line of Dialogue or Text
Christmas Eve in Gotham: First, a layer of pale snow had touched the city, and now sleet slants across the streets from the North...
Genre
superhero
Characters
Batman [Bruce Wayne]; Matty Lasko; Boomer Katz; Mister Jackson; "Fats" Morgan; Al; Louie
Synopsis
Batman stops a mob from stealing the day's receipts from a department store with the help of Boomer Katz, a paroled robber, and the light from a Nativity star.
Reprints

The Story of Fir Balsam (Table of Contents: 4)

The Gift (Table of Contents: 5)

The second page of the original story has been cut.

Uncle Marvel does not appear in costume. Captain Marvel Jr. and Mary Marvel identities are seen in splash panel only.

Alone for the Holidays (Table of Contents: 9)

The Present (Table of Contents: 11)

Genre
horror-suspense
Characters
Cain
Synopsis
On Christmas Eve, a man and his wife are awakened by the sounds of a prowler in the house.
Reprints

The Harley and the Ivy (Table of Contents: 13)

Santa Fronts for the Mob (Table of Contents: 14)

An Eye for Detail (Table of Contents: 15)

No, Bart, There Is No Santa Claus (Table of Contents: 17)