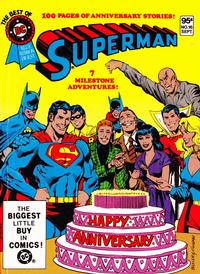 The Origin of Superman! (Table of Contents: 2)

Genre
superhero
Characters
Superman; Jor-El (flashback); Lara (flashback); Lex Luthor (cameo); John Kent (1st named, flashback); Mary Kent (flashback)
Synopsis
After a prologue which demonstrates Superman's amazing abilities, his origin is recounted. On the scientifically advanced planet of Krypton, Jor-El fails to convince the Council of Five that Krypton is doomed. As Krypton explodes, Jor-El and Lara send their son to Earth, where he is found and adopted by the elderly Kents. As Clark grows to maturity he manifests abilities far beyond that of mortal men. On his deathbed, his father urges Clark to become a powerful force for good as Superman.
Reprints

A 10th anniversary story. Name John Kent appears on Superman's father's tombstone. This is the only time this name is used. Kryptonians are shown to have x-ray vision.

The Super-Key to Fort Superman (Table of Contents: 3)

The War between Superman and Jimmy Olsen! (Table of Contents: 4)

The Conquest of Superman! (Table of Contents: 5)

23rd anniversary story. Inks credit confirmed by Pat Lang. Inks credit previously given to George Klein (as per Gene Reed and as credited on splash page) or Stan Kaye.

The Trial of Superman! (Table of Contents: 6)

A 25th anniversary story. In this book, the art for this story is incorrectly credited to George Papp. Plastino credit confirmed by Bob Bailey and Gene Reed.

The Superman-Batman Split! (Table of Contents: 7)

The Superman-Batman Split! Part II: A Tale of 3 Teams (Table of Contents: 8)

Genre
superhero
Characters
Captain Thunder (villain); Superman; Willie Fawcett; Clark Kent; Merokee (flashback); Lois Lane; the Monster League of Evil (flashback); a Dr. Sivana lookalike (flashback)
Synopsis
Willie Fawcett finds himself lost in Superman's universe and that whenever he changes into his super-powered alter ego of Captain Thunder he becomes evil. Superman helps him figure out the way to return to his universe and shake the evil influence of the Monster League of Evil.
Reprints

Back cover. Previews of the stories in the issue.