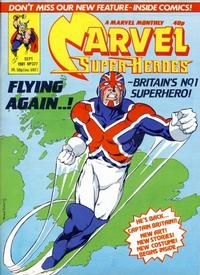 Honour Thy Father (Table of Contents: 1)

Before I'd Be Slave (Table of Contents: 2)

No in-story credits; Full credits given in X-Men Archives Featuring Captain Britain (Marvel, 1995 series); Throughout this series, Merlyn's name is alternately spelled the classic way as "Merlin" with no rhyme or reason for the difference in spelling.