The on-sale date is from the publication date recorded in the Catalog of Copyright Entries, Part 2, Periodicals, 1944, New Series, Vol. 39, No. 2. 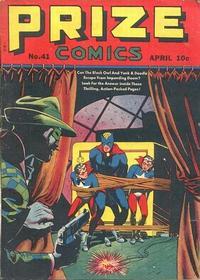 The Three Natures of the Frankenstein Monster (Table of Contents: 2)

The Nazis Who Were Afraid of the Rain (Table of Contents: 3)

The Ghost Whistle (Table of Contents: 4)

Bag the Axis (Table of Contents: 8)

paper-drive feature; w/ the Vaquero, who makes his first story appearance next issue