The Devil Takes a Bride (Table of Contents) 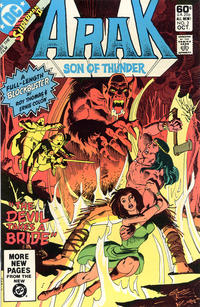 The Devil Takes a Bride! (Table of Contents: 1)

Job Number
J-7294
Genre
sword and sorcery
Characters
Arak (origin); Lord Hessa; Malagigi (introduction); Corinna; Angelica (flashback)
Synopsis
Arak is captured by the guards of a young girl, Corinna, he meets on a beach. She has him brought to her "father", Lord Hessa, who condemns Arak to his dungeon. While searching for a way to escape, Arak meets Malagigi, who claims to be great sorcerer for Carolus Magnus, King of the Franks. Arak escapes and flees the castle with Corinna, who claims to be a prisoner, as well. When Hessa pursues them, Arak learns Corinna is actually Hessa's mother; she mated with a demon for eternal youth. When Corinna's artificial youth begins to rapidly fade, the demon soon appears to reclaim her.
Reprints

The World of Arak (Late Eighth Century) (Table of Contents: 3)

A map of the world of Arak, circa late eighth century AD. Letters credit from http://kleinletters.com/.

How Arak, Son of Thunder Came to Be (Table of Contents: 5)