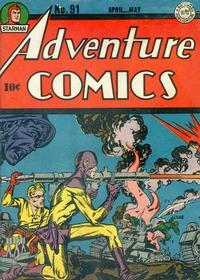 Genre
superhero
Characters
The Sandman [Wesley Dodds]; Sandy [Sandy Hawkins]; Mesmo; Leo the Lug (villain); Gargantua (villain)
Synopsis
When Sandman learns that crooks he is unsuccessfully battling are hypnotized into battling far beyond their means, he soon teaches the villains that hypnotism can be a double-edged sword!
Reprints

The Affair of the Unhappy Hercules! (Table of Contents: 5)

Daze of the Knight! (Table of Contents: 6)

The Rising Star of Johnny Teach! (Table of Contents: 8)

Genre
superhero
Characters
Starman [Ted Knight]; Jabez Wilkens (Johnny's godfather, cameo in flashback); Mrs. Teach (Johnny's mother, cameo in flashback); Johnny Teach
Synopsis
From the moment he was born, Johnny Teach was told he had been born under an unlucky star, and things happening in life seemed to prove it. But when Johnny teams up with the Starman, the Astral Avenger proves to Johnny that stars have nothing to do with success.
Reprints
Keywords
Gravity Rod

First Line of Dialogue or Text
We have friends in America...
Keywords
War Bonds

Treasure Is Where You Take It! (Table of Contents: 10)

Genre
superhero
Characters
Manhunter [Paul Kirk]; Mrs. Throckmorton; G. Hartley McPowers (villain)
Synopsis
A cash-strapped estate owner arranges a treasure hunt for his wealthy guests, but they are unaware that they are being divided into teams for a reason: it's easier for his gang to rob them!

Art credits from Craig Delich. We previously credited the pencils to Edmond Good.

No Time for Murder (Table of Contents: 11)

The Return of Ghenghis Khan! (Table of Contents: 13)

How Joe's Body Brought Him Fame Instead of Shame (Table of Contents: 15) (Expand) /