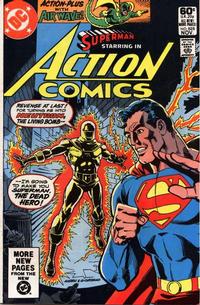 Job Number
J-3724
Genre
superhero
Characters
Air Wave [Hal Jordan]; Karen Peterson; The Cosmic Corsair (villain)
Synopsis
Air Wave battles a crook dressed as the Cosmic Corsair, but gets a bonk on the head. Hal forgets that he is Air Wave until Karen finds a way to remind him. After defeating the crook, Hal dresses up as Green Lantern for a costume party.
Reprints