[Crisis in Limbo!] (Table of Contents) 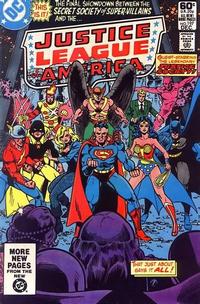 Crisis in Limbo! (Table of Contents: 1)

Job Number
J-7716
Genre
superhero
Characters
Justice League of America [Atom [Ray Palmer]; Batman (of Earth-1); Black Canary [Dinah Laurel Lance]; Firestorm [Ronnie Raymond; Martin Stein]; Wonder Woman (of Earth-1); Green Lantern [Hal Jordan]; Elongated Man [Ralph Dibny] (cameo)]; Justice Society of America [Johnny Thunder's Thunderbolt; Flash [Jay Garrick]; Hawkman [Carter Hall]; Hourman [Rex Tyler]; Johnny Thunder (of Earth-2); Superman (of Earth-2)]; Secret Society of Super-Villains [Ultra-Humanite; The Mist [Kyle]; Psycho-Pirate [Roger Hayden]; Rag Doll [Peter Merkel]; Cheetah (of Earth-1) [Deborah Domaine]; Brain Wave [Henry King]; Signalman [Phil Cobb]; Floronic Man [Jason Woodrue; Plant Master]; Killer Frost [Crystal Frost]; The Monocle [Jonathan Cheval]]
Synopsis
As Earth-2 begins to lose all of their heroes (save the ones in limbo in the suspended-animation chambers), the Earth-1 Secret Society members wonder why it happened there. They slowly realize they were duped by Ultra, who knew what would really happen. As they attack him, the master villain sends them back to Earth-1, and stranded there, their only chance is to get back to limbo and free the 10 heroes. Released, the heroes then defeat all of the Society members and Ultra is sent into limbo with everything returning as it was.
Reprints