Last issue.
This issue has variants:

The Legion Mutiny! (Table of Contents)

Howard Bender confirmed his pencils and Pablo Marcos inks on the border artwork. Bender also confirmed the characters drawn in the border and back cover represented all the main characters that ever appeared in Adventure Comics (posted on his Facebook page, 21 June 2017). 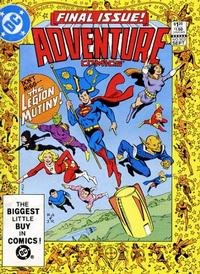 The Mutiny of the Legionnaires! Part I (Table of Contents: 2)

The Big Pull (Table of Contents: 5)

The Traders' Trap! (Table of Contents: 6)

Job Number
G-466
Genre
superhero
Characters
Aquaman [Arthur Curry]; Mera
Synopsis
Aquaman deals with aliens and primitives in another dimension while trying to return home. Mera's desire for him to return helps bring him back.
Reprints

The Tower of the Dead! (Table of Contents: 7)

Zatanna the Magician!
Genre
superhero
Characters
Zatanna; Jeff Sloane; Gorgonus
Synopsis
Zatanna and Jeff are stranded in another dimension, where the king forces them to enter a mysterious castle. In the castle, the two encounter Gorgonus, a Medusa-like creature, who turns Jeff to stone.
Reprints

Genre
superhero
Characters
Zatanna; Zatara; Jeff Sloane; Allura
Synopsis
Zatanna and Jeff return to Earth, which frees Jeff from his stony trap. They encounter and battle little goblins, who reveal that Zatara, Zatanna's father, is going to summon monsters to Earth. Zatanna battles Zatara, and learns his old foe Allura is really behind it all.
Reprints

[The Story of the Newsboy Legion] (Table of Contents: 9)

Job Number
X-204
Genre
adventure; children; superhero
Characters
Guardian (first appearance, origin); Newsboy Legion
Synopsis
Police officer Jim Harper discovers he can do good as the costumed Guardian in situations where the law is limited. Meanwhile, he also meets a group street kids who sell newspapers, and they help him bring down a criminal.
Reprints

Elastic Lad Jimmy and His Legion Romances! (Table of Contents: 10)

The Story Behind the Stories / text article / 1 page (report information)

Inside back cover. Comments about the Legion stories in the issue.