On-sale date from Amazing Heroes #4.
This issue has variants: 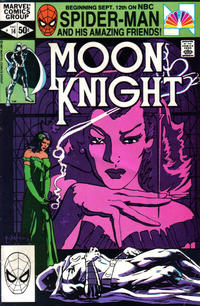 First Line of Dialogue or Text
There is a church in the South Bronx whose doors...
Genre
superhero
Characters
Moon Knight [Marc Spector; Steven Grant; Jake Lockley] (appearing as Steven Grant); Frenchie; Marlene Alraune; Stained Glass Scarlet [Scarlet Fasinera] (introduction, origin); Joe "Mad Dog" Fasinera (introduction, death); Gummitch; Vince Fasinera (flashback, death)
Synopsis
Moon Knight is on the trail of a young killer just released from prison when he comes across a mysterious woman who is also trying to intercept Joe Fasinera because he happens to be her son.
Reprints