4 extra pages from glossy ad pages in center of book (Atari and Camelot 3000).

[The Three Faces of Evil!] (Table of Contents) 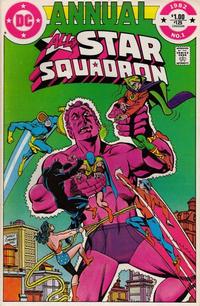 The Three Faces of Evil! (Table of Contents: 1)

Featuring origin recaps of Wildcat, the Guardian and the Atom as they are all shown to have the same trainer during their early months. The evil force of the story is the magic expelled from the Earth-One universe by the Guardians, as shown in Green Lantern (DC, 1960 series) #112.

The Flash of Earth-Two (Table of Contents: 3)

The Guardian (Table of Contents: 5)