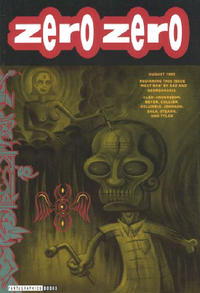 First Line of Dialogue or Text
Open up, Car-Boy! I know you're in there playing with yourself again
Characters
Car-Boy

Series logo with sample art from the story contents

The Forgotten Dream of a Melancholy Chef (Table of Contents: 3)

Gruesome Charlie in "No Erect Penises" (Table of Contents: 5)

I Was Killing When Killing Wasn't Cool (Table of Contents: 6)

The Licker in Lost Boobie-Chain Blues (Table of Contents: 7)

Kaz mentions doing breakdowns for this story in his Comics Journal #186 interview (April 1996).

Brief blurbs on this issue's artists accompanied by production credits and indicia. Includes two small illustrations from the listed artists.

First Line of Dialogue or Text
A slice of toast is bombarded by berries, while an amused couple speed by in a sports car.