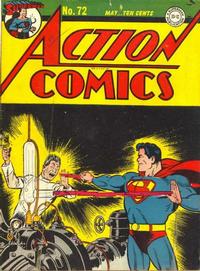 Superman and the Super-Movers! (Table of Contents: 2)

Genre
superhero
Characters
Superman [Clark Kent]; Lois Lane; Perry White; Mr. Grogan; Mr. Bixley; Oberleutnant Karl Brumer; Joe Drew; Mr. Sniggle
Synopsis
Superman compares himself to construction workers and heavy crane operators as he helps the owners of "Super Movers" against a rival, who is trying to buy the owner out in order to use the business as a front for robbery.
Reprints

The Guns of Killer Haines! (Table of Contents: 5)

[The Perfect Double] (Table of Contents: 7)

Be a Magician! Turn Waste Paper Into War Weapons! (Table of Contents: 8)

Genre
advocacy; superhero
Characters
Superman [Clark Kent]
Synopsis
Superman puts on a special show, for 100 pounds of waste paper as an admission price, to demonstrate to the kids how that much waste paper can be transformed into 115 cardboard boxes which can hold ten 20mm shells.
Keywords
paper salvage; waste paper

Choose Your Weapons! (Table of Contents: 9)

Out of Nowhere (Table of Contents: 11)

Cargoes of Death! (Table of Contents: 12)

Editorial Advisory Board of the Superman DC Comics Magazines (Table of Contents: 15) (Expand) /

Zatara states his powers are based on science and nothing more than hypnotism and illusion.