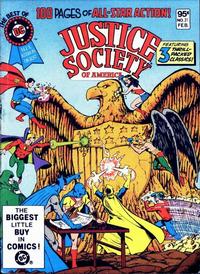 Best of DC -- Justice Society of America (Table of Contents: 1)

The Untold Origin of the Justice Society (Table of Contents: 2)

The Day That Dropped Out of Time [Introduction] (Table of Contents: 3)

Genre
superhero
Characters
Justice Society of America [Atom [Al Pratt]; Johnny Thunder (Earth-2); Hawkman [Carter Hall]; Wonder Woman (Earth-2); Green Lantern [Alan Scott]; Flash [Jay Garrick]; Dr. Mid-Nite]; Per Degaton (villain, introduction); Professor Zee
Synopsis
The JSA convenes their monthly meeting, Chairman Hawkman discovers a strange metal shield none of them had seen before. Wonder Woman recognizes it as Macedonian and translates it, speculating that this must deal with a case they have forgotten, so she uses the Magic Sphere. It shows the members how modern inventions age then suddenly disappear. The JSA members enter the room of their friend, Professor Zee, who has been badly wounded. He explains that the process being used is his handiwork, although someone else is causing it to occur....most likely his new lab assistant, Per Degaton.
Reprints

[The Day That Dropped Out of Time, Chapter 2] (Table of Contents: 4)

Genre
superhero
Characters
Flash [Jay Garrick]; Per Degaton
Synopsis
Flash must find penicillin to save the professor's life and is told there might be some in the time capsule in Colossal Caves, which would be immune to time change. He races there and confronts Degaton and his men, who overcome him, tie him up and place him in the capsule. The Flash uses his speed to propel the capsule through a wall, releasing him and the contents. He grabs the penicillin, subdues Degaton's men and races the penicillin over to the hospital, musing to himself that the JSA must figure out WHAT crucial event in the past Degaton is changing to cause the effects taking place.
Reprints

[The Day That Dropped Out of Time, Chapter 3] (Table of Contents: 5)

Genre
superhero
Characters
Atom [Al Pratt]; Per Degaton
Synopsis
Degaton's march into Gotham takes a detour when his men want to rob the gold from a vault in an insurance company for their pay. Degaton agrees and all goes well until the Atom shows up. After a brief struggle, Atom is captured and taken to the company's accident exhibit, which contains dozens of things that can cause instant death. Fortunately the Atom escapes, having at least learned that Degaton has changed "a battle" in the past, so he returns to the hospital with the news.
Reprints

[The Day That Dropped Out of Time, Chapter 4] (Table of Contents: 6)

Genre
superhero
Characters
Hawkman [Carter Hall]; Per Degaton
Synopsis
As modern conveniences disappear, the Sphere now shows Hawkman arriving at the Mayor's office, as Degaton's army of tanks emerges from the city's subway system. Degaton's men enters the Mayor's office, and take him prisoner as Hawkman enters through a window, and starts working over the criminals. But he is overcome and both men are taken to an antique shop, laid on a canopy bed, Degaton hits a switch, bringing the top and the bed closer to crushing the pair. Hawkman is able to stop this, and the pair escape. Hawkman then takes the Mayor to his office and asks him to keep the people calm.
Reprints

[The Day That Dropped Out of Time, Chapter 5] (Table of Contents: 7)

Genre
superhero
Characters
Dr. Mid-Nite; Per Degaton
Synopsis
Dr. Mid-Nite reaches the Hall of Science where top scientists have gathered and are told that, because the changes may become permanent, they must redesign all modern science over again. But Degaton tells them that he plans to do that himself and be the most powerful scientist in the world! A battle ensues, but Mid-Nite is captured along with three scientists who will now assist him in his mad plans. Doc escapes a death trap, uses his blackout bomb to save the scientists before they are killed, then heads back to the hospital to check on the professor's condition.
Reprints

[The Day That Dropped Out of Time, Interlude] (Table of Contents: 8)

Genre
superhero
Characters
Justice Society of America [Flash [Jay Garrick]; Green Lantern [Alan Scott]; Wonder Woman; Dr. Mid-Nite; Atom [Al Pratt]; Johnny Thunder]; Professor Zee
Synopsis
At the hospital, the doctor has administered the penicillin and the professor recovers enough to let the JSA know that Degaton has changed the outcome of the famous Battle of Arabela, that took place in 331 B.C. He tells the JSA to go to Colossal Caves and enter into his time machine, and go back to that year and cause the original outcome of that battle to happen. G.L. offers to go alone, fearing that they may scare Degaton into destroying the time machine. G.L. will then bring it back to the hospital and the entire JSA will go back in history to correct Degaton's actions.
Reprints

[The Day That Dropped Out of Time, Chapter 6] (Table of Contents: 9)

Genre
superhero
Characters
Justice Society of America [Green Lantern [Alan Scott]; Hawkman [Carter Hall] (cameo); Johnny Thunder (Earth-2, cameo); Wonder Woman (Earth-2, cameo); Dr. Mid-Nite (cameo); Atom [Al Pratt] (cameo); Flash [Jay Garrick] (cameo)]; Per Degaton
Synopsis
G.L. reaches Colossal Caves and uses his ring to enter the cave through the mountain's wall. He hears Degaton order Kale and his men to destroy the time machine, by sending it 10,000 years into the future with a bomb on board. G.L. charges into the machine, is knocked out and awakes in the future. Exiting, the JSA is there to greet him. He now knows he is in the future, but realizes that the JSA can still change the Battle of Arabela, so they head toward the time machine, which explodes as they near it. So Green Lantern uses his power ring to take the group 3000 years back into the past.
Reprints

[The Day That Dropped Out of Time, Conclusion] (Table of Contents: 10)

Genre
superhero
Characters
Justice Society of America [Johnny Thunder; Dr. Mid-Nite; Atom [Al Pratt]; Hawkman [Carter Hall]; Green Lantern [Alan Scott]; Wonder Woman; Flash [Jay Garrick]]; Per Degaton (villain); Professor Zee (cameo)
Synopsis
While discussing the fate of the JSA, Degaton notes modern inventions beginning to reappear. The scene shifts to 331 B.C. with Alexander the Great's Army being routed, but the JSA turns the tide, quick to defeat Degaton. Grateful, Alexander gives the JSA his personal shield and dagger, which they accept, then all fade away. The Magic Sphere finishes its tale, modernization is restored, and the strange shield is now legible. The story closes with Professor Zee in his lab with Per Degaton, who seems to remember some foolishness about him dreaming that he was the ruler of the world!
Reprints

Another Dynamite Comic from the House of Daring Concepts! (Table of Contents: 12) (Expand) /

Back cover. Previews of the interior stories. Includes covers to DC Special #29 and All-Star Comics #35.