Walker, Brian. 2010. Doonesbury and the Art of G. B. Trudeau. New Haven: Yale University Press.
This issue has variants: 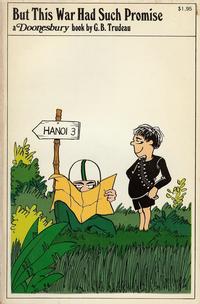 But This War Had Such Promise (Table of Contents: 1)

Garry Trudeau acknowledged employing Don Carlton as inker of Doonesbury (Alter 1990). Newspaper publication of Carlton’s work began “in early December [1971]”; Carlton initially lettered the strip for only a few weeks before Trudeau resumed lettering the strip. After about a year of Carlton inks and Trudeau letters, Trudeau again delegated lettering to Carlton, and the arrangement endured for decades (Walker 2010, 30–31). GCD’s letters credits reflect that the time period covered by this volume appears to begin during the “few weeks” of Carlton’s initial inking and lettering stint, and appears to end during the year in which Trudeau lettered and Carlton inked.
__________
References: