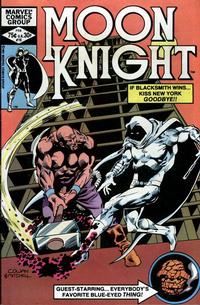 Shadows of the Moon (Table of Contents: 2)

Corrected credits and inker page credits added 2005 by Steven Tice.
Janice Chiang did not letter the credits box on page one.
Chiang is miscredited as "Janice Chaing".

Seekers of Stone (Table of Contents: 3)

Sometimes Following in Somebody Else's Footsteps Is a Dangerous Business... (Table of Contents: 5) (Expand) /