First Line of Dialogue or Text
You!! You look like Hulk -- but I am Hulk!
Genre
superhero
Reprints 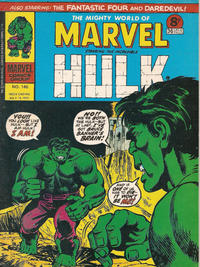 Job Number
996 Z
Genre
superhero
Characters
Hulk; Jarella; Torla; Lord Visis (villain, death); Krylar (villain, death)
Synopsis
Hulk rescues his lady love and leads her people in revolt. That is, until Visis teams up with master assassin Krylar who has a weapon that makes one battle one's darkest fears. The weapon is turned on the Hulk and Hulk with Banner's mind finds himself facing his old brutish self. Jarella's magicians counter by ending the spell that makes Hulk smart. Pym's serum wears off and Hulk grows back to normal size.
Reprints

Second half of the original story.

Nobody Laughs at the Jester! (Table of Contents: 3)

First Line of Dialogue or Text
Thunderbirds to the rescue!