Have a Nice Day (Table of Contents) 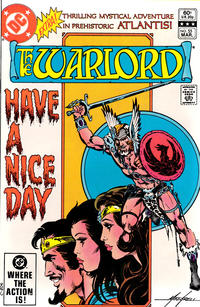 Scripting credits per Mike Grell October 2006. "I worked by dictation and she typed the scripts. I plotted, she wrote. I got billing credit."

Logo design credits from Todd Klein, who states Duursema penciled the magic symbol in the O and he designed the rest.

Job Number
L-947
First Line of Dialogue or Text
This is an extremely short note.

Letters from: Daniel Lee, The Ramblin' Jersey, and Mike Ryan.