[His Name Is Psycho!] (Table of Contents) 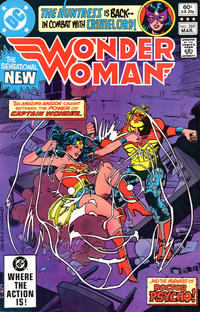 His Name Is Psycho! (Table of Contents: 1)

Origin of Dr. Psycho, closely mirroring his Golden Age (Earth-2) origin in Wonder Woman (DC, 1942 series) #5. "Psycho" is a shortened form of the Dr.'s Greek surname, not revealed here. Wonder Woman notes she has never heard of Dr. Psycho before, suggesting this is Dr. Psycho's first Earth-1 appearance. Steve Trevor's other-dimensional origin allows Dr. Psycho to use him as a source for ectoplasm. Jumpa, Princess Diana's kanga from the Golden Age, makes an appearance.

Walls of Stone, Chains of Steel! (Table of Contents: 3)