On-sale date from Amazing Heroes #7.
This issue has variants: 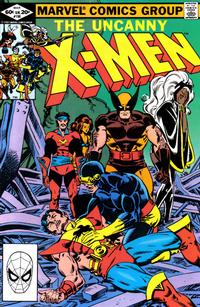 First Line of Dialogue or Text
Scott, I know something of how you feel...
Genre
superhero
Characters
X-Men [Professor X; Cyclops; Storm; Wolverine [Logan]; Colossus (death?); Nightcrawler; Sprite [Kitty Pryde]]; GUESTS: Tigra; Corsair; Shi'ar; Lord Chancellor Araki; Lord Samedar; VILLAINS: Deathbird; The Brood (first appearance); Skur'kll (death); CAMEOS: Kitty as Darth Vader; Majestrix Lilandra; Gladiator; Starbolt; Edwin Jarvis; D'Ken (hallucination)
Synopsis
Cyclops has a hard time dealing with the fact that Corsair is his father. The X-Men are abducted by the Shi'ar and told that Lilandra has been abducted by terrorists. They are given 24 hours to find her or the Shi'ar will take matters into their own hands. Kitty and Kurt are left on their ship as hostages. The X-Men go to the Avengers for help but only find Tigra in residence. Our heroes battle Deathbird and the Brood through the new IBM complex for Lilandra's freedom. The villains take off in a spaceship and, in the ensuing rubble, the X-Men find Colossus with a spike through his chest.
Reprints

Dave Cockrum reports 2006 that "I did loose pencils in blue. Editor Ann Nocenti referred to them as 'shakedowns'. But everything was there."