The Man Who Created Villains! (Table of Contents) 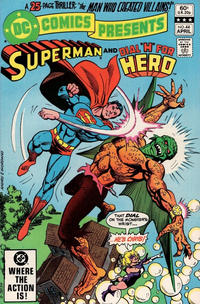 The Man Who Created Villains! (Table of Contents: 1)

Job Number
S-3821
Genre
superhero
Characters
Chris King [as Beast-Maniac; as Prism; as Essence]; Vicki Grant [as Sphera; as Blazerina; as Thundera]; Superman; Perry White; Jimmy Olsen; The Nullifier (villain); The Master (villain)
Synopsis
Perry White sends Clark and Jimmy to the town of Fairfax to investigate the great number of heroes that have been appearing there, so they meet Chris and Vicki and become involved in their ongoing battle with the Master and his villains.
Reprints
Keywords
Daily Planet; Flying Newsroom; H-Dial