Is There Honor among Thieves? (Table of Contents) 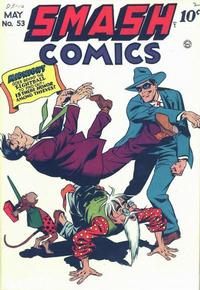 First Line of Dialogue or Text
That female wench!.. I'll get her for this!
Genre
adventure; superhero
Characters
Midnight [Dave Clark]; Gabby (a monkey); Doc Mortimer Wackey; Sniffer Snoop; Hot-Foot (a polar bear); Darla Dee (villain); Sam Doe (villain); Moxie Doe (villain)
Synopsis
Lady mob boss Darla Dee drops in on Dave to announce her takeover of the city, and when he refuses to lead her to Midnight, she frames him for murder.

Ronnie the Rat (Table of Contents: 2)

Originally credited "Witmer Williams ?", but does not match his other credited stories in this features. Compared with Leav's signed story in Power Comics #4, everything matches, face of the policeman, large hands, way of running with high lifted knees and some panels without backgrounds. Only the inking is different.

[Daffy's School For the Muscular Development of American Womanhood] (Table of Contents: 4)

All Quality humor features credited to Marvin Stein are actually by Milt Stein.

First Line of Dialogue or Text
Them subjects o' mine...
Genre
humor; children

Heads in 3/4 rearview with stretched necks and jawbones going back behind the ear, even in side view, is peculiarly Tirman. This can be found in his credited "Mike Gibbs Guerilla" story in Adventure Comics (DC, 1938 series) #88.

Death Came on the Wind (Table of Contents: 8)

The Joke is on the Racketeers! (Table of Contents: 10)

Genre
superhero
Characters
Jester; Quinopolis; McGinty; John McMurry Spencer; Stoneface
Synopsis
The Jester has to deal with a rookie cop who does things by the book.

This matches Leav's work in his signed story in Wanted Comics (Wanted-Orbit, 1947 series) #52.