While this volume/number change appears nonsensical at first glance, note that Captain Aero Comics had just put out it's v3#12 the month before. See this series' v2#6 (19) for another point where these two series' numbers seem to switch. Captain Aero puts out its own v3#13 the next month, and for both series it is the final Et-Es-Go issue before that company is replaced with Continental.

Indicia frequency unknown. The Continental issues are bi-monthly but the immediately prior Et-Es-Go issue was monthly despite at least a month gap to either side of it. Likely monthly, but not at all certain. 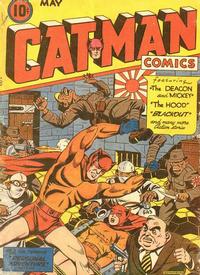 Bombs Below! (Table of Contents: 1)

The Man Who Could Work Miracles (Table of Contents: 2)

The Valkyrie! (Table of Contents: 3)

Divide by Two (Table of Contents: 5)

The Baron of Monte Carlo (Table of Contents: 6)

The Lost Suspenders (Table of Contents: 7)