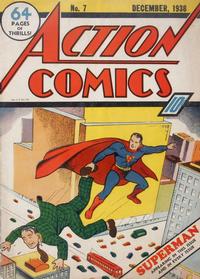 First Line of Dialogue or Text
Friend of the helpless and oppressed is Superman...
Genre
superhero
Characters
Superman [Clark Kent]; Lois Lane; Curly; George Taylor (editor, unnamed); Jordan; Derek Niles (villain); Trigger
Synopsis
The Jordan Circus is having a rough go of it and the promissory notes are coming due, so Superman decides to join the circus to help it pay off those notes and get it back into the black.
Reprints

This looks like Boring throughout with partial inks by Shuster himself.

Paul Lauretta was previously suggested as partial inker, but by comparison with a signed story in Marvel Mystery #3 there is no similarity.

First Line of Dialogue or Text
With Pep Morgan at quarterback...
Genre
adventure; sports
Characters
Pep Morgan; his coach
Synopsis
Pep is kidnapped in order for his team to play without him, and so win big money for a crooked gambler. He overpowers his captors, appears on the field with only a minute to go, scores the final touchdown and kick, and gives his team a 14-10 victory.

First Line of Dialogue or Text
He must be crazy throwin' the ball away...
Genre
non-fiction; sports
Characters
Babe Ruth; Red Grange

First Line of Dialogue or Text
All right - I'll be ready at eight-thirty!
Genre
humor; domestic
Characters
The Diddle Family

First Line of Dialogue or Text
Early that morning Dick and Ted left the small outpost, in the deep Congo jungle, for the...
Genre
jungle
Characters
Dick; Ted; a group of Kantu tribesmen

[The Walking Pawnshop] (Table of Contents: 16)

The Zulu Diamond Mine (Table of Contents: 19)

First Line of Dialogue or Text
Young 'Buffalo Bill', who joined the Pony Express when he was only 14 years of age, made a record run...
Genre
non-fiction; western-frontier
Characters
Buffalo Bill; John Slaughter; Wild Bill Hickok

Some facts about western heroes.