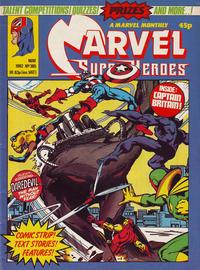 Attack of the Binary Beings (Table of Contents: 1)

Genre
superhero
Characters
Captain Britain; Jackdaw; Binary Being (Villain, Introduction, Death)
Synopsis
Cap and Jackdaw are warping home when they are abducted by alien beings who think with one body and act with another.
Reprints

Heart of Stone (Table of Contents: 2)

The Hunt (Table of Contents: 3)

A Martian Genesis (Table of Contents: 4)