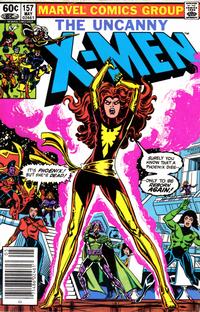 First Line of Dialogue or Text
How much longer, Corsair?!
Genre
superhero
Characters
X-Men [Professor X; Cyclops; Storm; Wolverine [Logan]; Colossus; Nightcrawler; Sprite [Kitty Pryde, also as Phoenix]]; Majestrix Lilandra; Gladiator; Imperial Guard [Starbolt; Oracle; Warstar; Fang; Hussar; Quasar]; Starjammers [Corsair; Hepzibah; Raza; Ch'od; Sikorsky]; Lord Chancellor Araki (death); Waldo; Deathbird (villain); Brood (villain); Lord Samedar (villain); Haeg'rill (death)
Synopsis
The X-Men and Starjammers race to try and repair their ship in time to contact Chancellor Araki and tell him they have rescued Lilandra so he doesn't have to destroy the Earth. Little do they know that Samedar, a secret ally of Deathbird's, has killed Araki and plans on blowing up the planet anyway. Xavier tries to telepathically contact Kurt and Kitty who are on the Shi'ar ship but slips into a Brood induced coma. In order to delay Samedar's explosive plans, Kitty runs around the ship impersonating Dark Phoenix to spread fear and confusion among the Shi'ar.
Reprints

Dave Cockrum reports 2006 that "I did loose pencils in blue. Editor Ann Nocenti referred to them as 'shakedowns'. But everything was there."