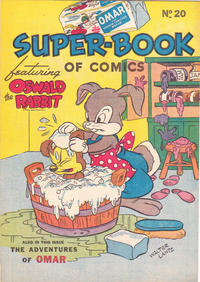 First Line of Dialogue or Text
Here's the best hatchet in my store, Oswald ... and cheap at the price!
Genre
anthropomorphic-funny animals
Characters
Oswald the Rabbit; Hi-yah Wahoo (a child-like Native American friend); Mrs. Possum (a motherly store proprietress); Toby Bear (a bear-child friend); Maggie Lou (a doll child friend); Mister Grizzly Bear
Synopsis
Hi-yah, taking offense, intends to boycott Oswald's proposed change of venue for his birthday party. Hi-yah praises his own hunting skill after he lifts Grizzly's seemingly abandoned bearskin coat of fur and recovers his own canoe filled with Toby and Oswald's catch of fish, but after he makes off with Mrs. Possum's birthday cakes he is found out with his swag and mends his ways, like a naughty child yielding to his peers' morally authorotative implied threat of force by aggrieved Grizzly.
Reprints
Keywords
American Indian; children; culture; language; Native American; tepee; tipi

The story starts on the inside front cover.

First Line of Dialogue or Text
Prince, this is a real vacation - after all the excitement we've been through!
Genre
adventure; fantasy-supernatural; superhero
Characters
Prince Omar; Sweeney; Junior; The Professor (villain); outlaws (villains); Prince Omar's horse (killed)
Synopsis
Prince Omar, Sweeney, and Junior stumble across white men dressed as Indians using "atomic bullets". This leads to a killer shooting to death Omar's horse out from under him. Omar flies on a current of air to capture the killer. It eventually leads them to the cave lair of The Professor who has perfected the atomic explosive. The Professor escapes but one of his henchmen is captured. Omar takes him up into the sky to make him talk. Out of fright, he tells that one of the mines in Saline Valley is where the secret factory of the Professor is. The henchman dies of fright in Omar's arms.

The story ends on the top of the back cover.